In the last two years I’ve been trying to learn Hindi on and off. I have an assorted vocabulary from growing up, but Hindi isn’t my mother tongue – technically it should be Malayalam, Telugu or Tamil, not English. But English is both my parent’s first language and mine. Growing up mother used slurs of Hindi, Sanskrit and Afrikaans to tell us off, or call us to hurry up, but English was her first language. She is 99% self-taught in Hindi, partially speaks Tamil, is fluent in Afrikaans and is teaching herself Bengali amongst many other dialects.

This triptych Relative (2015) is a set of three photographs of my siblings and self. In the guise of exotic and ethnographic image, I’ve photographed each of us in our Mothers garden. Onto each image I’ve written in devangari script with transliteration, practicing my Hindi onto the image of our bodies. The relationship between place, language and bodies intersects. Stereotypes placed on us through our hybrid upbringing on us are reflected in these images as well as the hybridised sense of place, identity and nation.

Alongside the triptych a meditative sound piece repeats my attempts at pronouncing the Hindi alphabet. 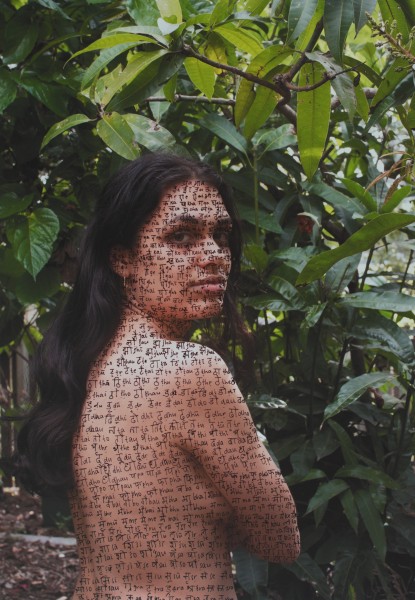